You are here: Home1 / New Varieties 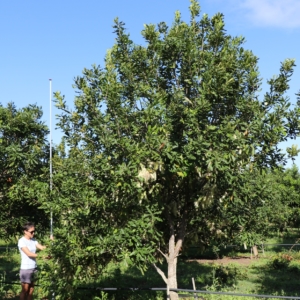 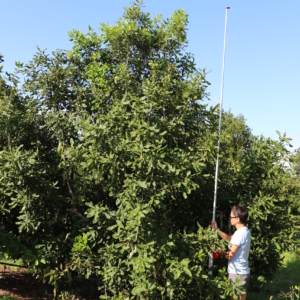 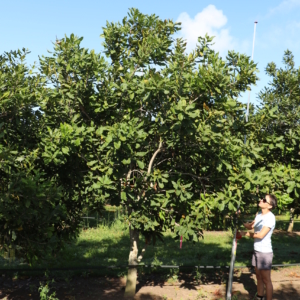 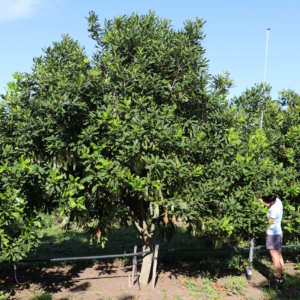 Each of the new varieties has been evaluated as part of a group of 20 industry breeding lines compared with existing industry-standard varieties in a range of sites around Queensland and New South Wales. The assessment measured yield, kernel quality and tree performance of all varieties to ultimately select and release these four exciting new high-yielding varieties to the macadamia industry.

The information on these varieties has been sourced from the RVT Series 3 (Phase II) up to the end of Year 9.  This project has been funded by Hort Innovation, using the macadamia research and development levy and
contributions from the Australian Government and Queensland Department of Agriculture and Fisheries.

is the price paid in $ per kilo by processors to growers for nuts, uncracked and dehusked at 10% moisture content

caused by a fungal pathogen Pseudocercospora macadamiae, is a major disease of macadamia in Australia

caused by several fungal species, amongst others Colletotrichum gloeosporioides and Phomopsis spp.

a disorder of macadamia trees that is characterised by excessive upright growth with few side branches and increased vegetative vigour resulting in reduced flowering, poor nut set and reduction in yield (O’Farrell, 2011)

a stem with a well developed root system, to which a piece from another plant is grafted

Are these new varieties available for planting outside of Australia?

The commercialisation agreement for these four new macadamia varieties is limited to sales of the new plants within Australia.

Any enquiries to purchase plants for production outside of Australia should be directed to the owners of the PBR – Hort Innovation and DAF.

How much is the royalty payable per plant?

The royalty payable per plant is currently $4 + GST and this figure is set by the owners of the PBR. This amount of royalty is collected by the licensed nursery at the point of sale for plants and is remitted back to the owner of the PBR.

Macadamia Innovation receives a small percentage of this royalty as the commercialisation fee for managing access to and sales of any of the new varieties.

How long does it take from order to delivery for new macadamia plants in any of these new varieties?

As these trees are grafted onto a rootstock, it takes a reasonable period of time for the rootstock to grow to a sufficient size for grafting and then a further period once a piece of budwood has been grafted before the plants are ready for planting. As these varieties are new to the market, it is the supply of budwood for grafting that is the factor limiting sales.

Allow up to two years from the time of ordering to expected delivery of trees – the nursery will be able to give you a more concrete timeline based on your confirmed order.

All four of these new high yielding macadamia varieties are fully protected under PBR.  To purchase any of these new varieties, you will be required to sign a Non-Propagation Agreement with the licensed Nursery business that you purchase plants from.

A Non-Propagation Agreement commits you to a series of terms including:

The DRAFT agreement is available for review here

What data is the ‘boost in productivity’ claim based on?

Each of the new varieties was evaluated as part of a group of 20 CSIRO breeding lines compared with existing industry-standard varieties  – 344, 268, 741, 816 and A16 – in a range of sites around Queensland and New South Wales.

The assessment measured yield, kernel quality and tree performance of all varieties to ultimately select and introduce these four exciting new high-yielding varieties to the macadamia industry.

The ‘*Up to 38% Boost in Productivity’ compares the total cumulative kernel yield at both Bundaberg and Alstonville over 9 years compared with the same time period for the variety 741, as reported in RVT Series 3 Phase 2.

Sorry for bringing this up, but this website uses cookies to improve your user experience. Continuing to use our site means we're assuming you're happy with this.

We may request cookies to be set on your device. We use cookies to let us know when you visit our websites, how you interact with us, to enrich your user experience, and to customize your relationship with our website.

Click on the different category headings to find out more. You can also change some of your preferences. Note that blocking some types of cookies may impact your experience on our websites and the services we are able to offer.

These cookies are strictly necessary to provide you with services available through our website and to use some of its features.

Because these cookies are strictly necessary to deliver the website, refuseing them will have impact how our site functions. You always can block or delete cookies by changing your browser settings and force blocking all cookies on this website. But this will always prompt you to accept/refuse cookies when revisiting our site.

We fully respect if you want to refuse cookies but to avoid asking you again and again kindly allow us to store a cookie for that. You are free to opt out any time or opt in for other cookies to get a better experience. If you refuse cookies we will remove all set cookies in our domain.

We provide you with a list of stored cookies on your computer in our domain so you can check what we stored. Due to security reasons we are not able to show or modify cookies from other domains. You can check these in your browser security settings.

These cookies collect information that is used either in aggregate form to help us understand how our website is being used or how effective our marketing campaigns are, or to help us customize our website and application for you in order to enhance your experience.

If you do not want that we track your visit to our site you can disable tracking in your browser here:

We also use different external services like Google Webfonts, Google Maps, and external Video providers. Since these providers may collect personal data like your IP address we allow you to block them here. Please be aware that this might heavily reduce the functionality and appearance of our site. Changes will take effect once you reload the page.

The following cookies are also needed - You can choose if you want to allow them: