Macadamia is Australia’s most successful indigenous agricultural commodity. Although initial development through breeding and agronomic research was carried out in Hawaii at the Hawaii Agricultural Experiment Station (HAES) during the 20th century, this work has been furthered in Australia.

New varieties were developed in Hawaii, tested in previous regional variety trials and planted widely over the past 40 years in the then-fledgling Australian industry with varying success. Local macadamia breeding programmes were also developing and releasing varieties.

Variable performance of these Hawaiian varieties in Australia led to the establishment of the National Macadamia Breeding Programme.

From the first generation of macadamia seedlings 20 genotypes were selected to be included in Regional Variety Trials Series 3 along with five standard varieties (HAES 741, HAES 344, HAES 816, HAES 246 and A16). These genotypes were planted and tested in locations in QLD (Mackay, Emerald, three sites in Bundaberg, and Childers) and NSW (Alstonville, McLean’s Ridges and Macksville) for nine years.

Information on yield, nut and tree characteristics and kernel performance was collected and, using sophisticated genetic analysis, developed recommendations to the Australian macadamia industry. The different genotypes were grafted onto two rootstocks, H2 seedling and Beaumont cuttings, in a number of the blocks to test influence on yield and tree performance in different environments.

There was no consistent rootstock x scion (budwood) interaction meaning that in some locations, some traits, in different years showed some significant rootstock effect. For further details about the rootstock results in different soil types and regions, please review the final report.

Four new  high performing macadamia varieties have been identified and commercialised by the Department of Agriculture and Fisheries (DAF), in partnership with Macadamia Innovation, from the CSIRO group of 20.

The four DAF varieties are currently known as:

This summary is provided from the Final Report into Macadamia Regional Variety Trials Series 3, Phase 2 (MC11001) 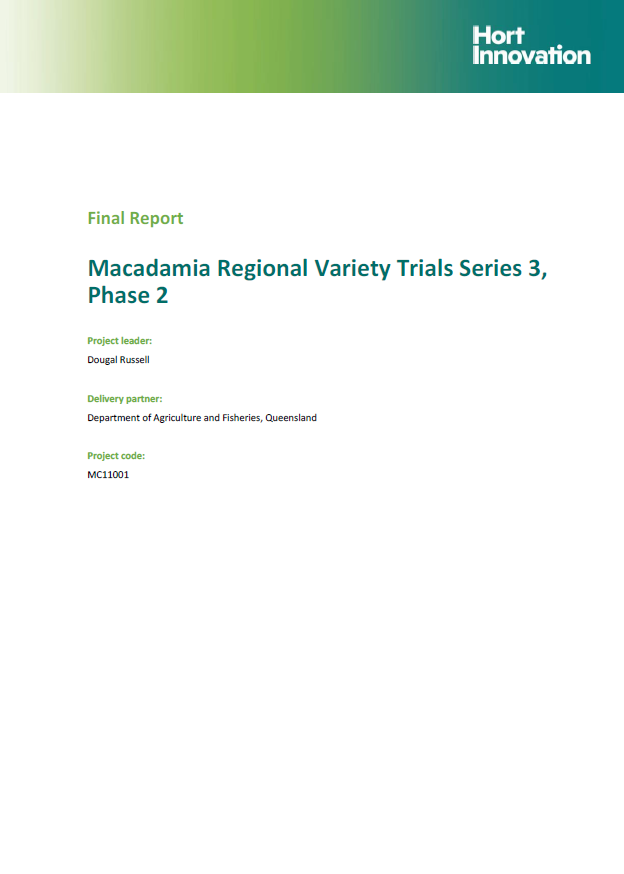 Sorry for bringing this up, but this website uses cookies to improve your user experience. Continuing to use our site means we're assuming you're happy with this.

We may request cookies to be set on your device. We use cookies to let us know when you visit our websites, how you interact with us, to enrich your user experience, and to customize your relationship with our website.

Click on the different category headings to find out more. You can also change some of your preferences. Note that blocking some types of cookies may impact your experience on our websites and the services we are able to offer.

These cookies are strictly necessary to provide you with services available through our website and to use some of its features.

Because these cookies are strictly necessary to deliver the website, refuseing them will have impact how our site functions. You always can block or delete cookies by changing your browser settings and force blocking all cookies on this website. But this will always prompt you to accept/refuse cookies when revisiting our site.

We fully respect if you want to refuse cookies but to avoid asking you again and again kindly allow us to store a cookie for that. You are free to opt out any time or opt in for other cookies to get a better experience. If you refuse cookies we will remove all set cookies in our domain.

We provide you with a list of stored cookies on your computer in our domain so you can check what we stored. Due to security reasons we are not able to show or modify cookies from other domains. You can check these in your browser security settings.

These cookies collect information that is used either in aggregate form to help us understand how our website is being used or how effective our marketing campaigns are, or to help us customize our website and application for you in order to enhance your experience.

If you do not want that we track your visit to our site you can disable tracking in your browser here:

We also use different external services like Google Webfonts, Google Maps, and external Video providers. Since these providers may collect personal data like your IP address we allow you to block them here. Please be aware that this might heavily reduce the functionality and appearance of our site. Changes will take effect once you reload the page.

The following cookies are also needed - You can choose if you want to allow them: